I went through a range of emotions as I read this book, so much so that at times I put it down and picked up a couple non-fiction books to peruse when the summersaults in my stomach became a bit too much.

First, let me say that this is a work of creative craftsmanship, so beautifully written. Danzy Senna is a writer's writer. This was her debut that for years, sat on my bookshelf.

The cover is what stood out to me. It was on a table at the Saint Louis County Bookfair, an annual gathering of bibliophiles from all over who eagerly filled carts and suitcases with tomes ranging from $1-5, all of them brand new.

For years, I've read and reviewed works by Black/African American women.  That is why I picked up the book, placing it on my growing TBR pile, waiting for it to fit into the queue between seminary and teen literary works.

This summer, in that steaming space between July and August, waiting on my daughters to figure out how they wanted to get all their stuff over a thousand miles to college, I began to look at the volumes in my home library. Some were recent purchases and best sellers, others are those I've had for years. 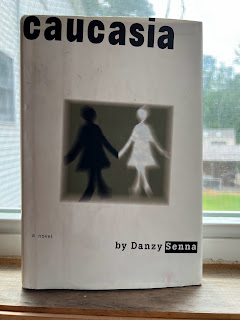 The cover stood out to me and I pulled it out, "oh wow, I forgot I had this." I sat down to read it.

My preference is for the first-person, I love the intimacy of the protagonist's voice and their invitation into the world as they see it.

It was a rare treat to read a coming-of-age story, of sorts, set in a time that was very familiar to me.

The author, like the protagonist, was born in 1970. I was starting first grade back then, like the older sister in the book, Cole, we were the last of a generation, born the year of the Civil Rights Act being signed. We were supposed to be ushering in a new promise.

This book centers the complexities of that time period. Set in Boston, it wrestles with the issues of race, segregation, busing, and the hyper fear that surrounded anything to do with civil, social, racial, and gender rights.

Caught in this entangled web of philosophies was this little girl, a mixed race girl who very much looked white. She was wrapped in a world of her brilliant but troubled parents whose ideologies were not enough to keep their marriage together, each of them spiraling out of the emotional roller coaster of the movement.

The father and mother were somewhat hippie intellectuals meet Black Panther Party meet feminist idealists meet off-the-grid Woodstock-types meet liberals meet philosophers meet privileged lost souls. That they met at Harvard was promising, that the very place of their meeting set them up for what became the failures of their lives, was inevitable. They were too smart for the good of themselves and their children.

Girls coming of age in the early 1980s, now in the Reagan era with a reconstituted emphasis on racist policies, meant they were subjected to the vitriol of white Americans who were afraid of changing status, not so unlike 2022. The beginning issue was busing that ended in Oakland and the hyper policing of Black communities in Reagan's fabricated war on drugs, in it all, these girls were left to find themselves in a society that did not want to believe that part Black and part White girls like them had a place.

Cole, the older sister, looked more Black. Birdie, the younger sister and the narrator of this drama, looked more white. That the parents hyper melodrama reached a self-made crisis of them splitting up the daughters-  the white mom taking the white-looking daughter through years of being unseen in places like New Hampshire and Maine, and the Black father taking the black-looking other daughter first to Brazil to only end up in Oakland with her estranged from his mental meanderings through the racial morass of now 1982 America - is a constant source of anger throughout the story. How the parents centered their own pain and disappointment while ignoring the very real needs of their daughters.

Assumptions are always made about what kids can endure, about how resilient they are, how they will be "better off" with the decisions adults make that are often more about the adults and their fantasies.

Such is this story, the mother was desperate for meaning in her life,  unaccepted by her blue blood mother, encased in a fat body that society disdained, she fashioned a narrative of herself as some true liberation-seeking-activist who was on the run from the FBI and Cointelpro. She was co-opting the movement to give herself a purpose but neglected to see the impact on her daughters. They each thought she was bit off and why couldn't she just be a "normal" mom.

Birdie experienced a lot as a young girl and teenager, that by the time she was fourteen and stood up for herself, the adults around her could only give up the fight. They fought, of course, to try to keep her in the bubble of their making, but her declaration of independence and autonomy is what ultimately set her free to discover herself.

We don't know what came of Birdie once she made it to Oakland was reunited with Cole, but what we can surmise is that her life in hiding in plain site in a challenging American continued to trouble her thoughts of what it even means to be human.

This is a deeply moving, important, and emotional story of a girl just trying to find her way. It will resonate in 2022 in this ever evolving experiment called America.

Writing as Taye Foster Bradshaw, coming of age in the same time period in the safe and stale midwest, I still ask questions about what it was all about.