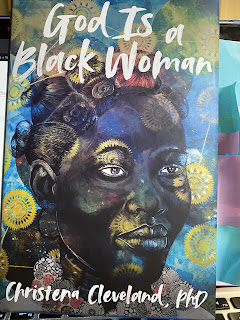 I have been mesmerized by the beautiful Black woman on this cover.
To me, literary work of late has been as much about the cover art as it has been about the telling inside.
So for all of 2022, so far, I was following the IG promotion of Christena Cleveland, PhD, hyping us up to get this book when it drops.
Now, all authors do that, as they should. If they don't believe in their work enough to post or Tweet about it, why should I want to plop down $26.99+tax+shipping for the imaginations of their day?
Her posting hit my Bookgram feed around the same time as I was engaging with The 1619 Project, another aesthetically pleasing offering, and Shouting' in the Fire, a cover on this slim book that draws ones eye in. So, of course I wondered what this was about.
Until encountering her on IG, I did not know about this sociologist and former professor at Duke Divinity School down in North Carolina. I went to seminary in boring old Missouri and while a budding womanist, certainly did not have images like this on the covers of books to proclaim loud and clear that God is a Black Woman.
So I could not wait for this book to arrive.
I preordered it, like I pre ordered several other 2022 releases because I believe in supporting Black writers, especially Black women writers.
These are my thoughts, some I shared already on Facebook, and as you know, I have just this year started adding the Literary Non Fiction as a further celebration of the literary works of Black women.
Key takeaways and palate-pleasing-pronouncements have included additions to the secular lexicon like whitemalegod, Sacred Black Feminine,
Clear, post worthy statements of facts like,

"Her. unapologetic Blackness is an inconvenience to white people who have long benefitted from and participated in whitemalegod's oppression of Black people." 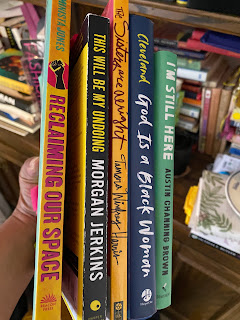 In doing so, I found spaces for myself and my daughters, the top of the Gen Z, who have thoughts about Millennials and the future of what it means to be liberated.
So, I finished this book with the beautiful cover and delightful stories that kept me company on my morning walks around the hardwood floors in my entryway, dining room, and living room. I will place her in the company of her sisters on my literary non-fiction shelf in my home library this afternoon as an early March snow blankets the sky in my Connecticut home.
This book is what is wanted in the heat of the day, like  a cool glass of lavender lemonade sitting at the feet of the Black Madonna with your sister friends taking a moment to just breathe through all the aggressions you went through and can exhale in peace because at least you know there is a Black Mama out there, been out there, who knew that one day you would be seeking her out.
____________________________________________
©2022 by Antona B. Smith, M. Div, MBA. All Rights Reserved. readwritethinkconnect@gmail.com,
Black Madonnas Black women literary non-fiction Duke Divinity School France Millennials Mitzi Smith Ntozake Shange patriarchy Renita Weems sexism Vanessa Lovelace Vineyard Conservative Christian