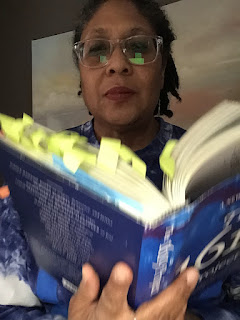 This book struck a nerve.

Perhaps that is why there has been this hyper vigilant manufactured hand wringing over CRT.

It started when the esteemed Journalist and Professor, Nikole Hannah-Jones used her research and inquisitive skills honed though a stellar career to ask the fundamental questions about 1619. She called it a new origin story and through first and second person research, set out to tell the story of America.

The New York Times Magazine feature was well read and well regarded by so many.

I was a newly minted M.Div when the magazine came out in August 2019 and being in the Midwest, was not able to pick up a paper copy.  I read excerpts of it online and followed the Twitter posts.  I was intrigued.

Then the big lie.

And in 2021, there became this dog whistling even louder of CRT.

Mind you, this is a graduate level, doctoral level theory that is NOT taught in the nation's K-12 schools. Not even in most baacalauerete programs is this pedagogy even encountered.

But the KarenBeckySallySueJimBobJoe scared and vocal minority of yt people, adjacent to those who stormed the capital, began to bottle their new brand of racism in everything from masks to mandates to making little Alice and Allen feel bad about what their ancestors did.

Their same ancestors who sat out picnic spreads and brought their children, who made postcards about it, argued in Congress about it, went on killing sprees about it, and set up sundown towns, exorbitant rents and home prices for it, yelled at little kids about it, these same ancestors who did the horrible things and documented it now in this digital and hyper aware age, don't want their kids to know about it.

It hasn't been that long.

There is a new origin story apart from what I was told in school about the Puritans just seeking a land to worship freely, the land of the free, home of the brave, all that in the 1970s integrated classrooms of my Midwest town were Black and white kids sat together. We were supposed to recognize each other as the generation post The Civil Rights Movement and laws of 1964 and 1965. That we "got it" and the parents were repentant.

That is the overall message of this work.

They did not get over it, there are still people alive who witnessed lynchings, who sent those postcards, who screamed at little kids trying to go to school, who protested busing and affordable housing.

They are still alive and are scared.

Scared of the changing demographics of this country.

Sitting all this against the backdrop of this important date, Nikole Hannah-Jones amazed an incredible group of Historians, Artists, Writers, Poets, Culture Critics, Theologians, and Professors to do first and second person research on topics that include The Preface and Chapter One: Democracy, by the Creator of this project; Race, Sugar, Fear, Dispossession, Capitalism, Politics, Citizenship, Self-Defense, Punishment, Inheritance, Medicine, church, Music, Healthcare, Traffic, Progress, and Justice - the final chapter also by the creator of this project.

In between each of the eighteen divisions is works of poetry and some short fiction that relates to the previous topic.  It is a respite, honestly, a moment to inhale and exhale because the work is so heavy.

I am not a slow reader, but all month, have been unable to read this text straight through. I've had to pause and shake my head, pray, cry, scream, and write it out. I had to walk away at times and read something else. A few times, I had to just take refuge in mindless TV because it was too heavy.

Pressing through, though, is the gift and goal of this work as we consider who this country will be in the next decade of this century, as now Generation Z is entering college as the most diverse, most technologically astute, and most adaptable of us all. They, along with their younger siblings, Generation Alpha, are poised to make significant changes if the goddegy older Boomer Is and scared-out-of-their-wits Generation X and Millennial parents get out of the way.

Reading history informs and empowers us if we are willing to take the sometimes painful journey through it.

There is an African American Proverb tied back to West Africa, in the image of the Sankofa bird.  It is an old shaped bird because its body is moving forward but its head is turned backward. The proverb, "go back and get it" is conveyed to understand the wisdom in the listening to the elders, in sitting with uncomfortable truths to discover future possibilities, all of it relating to how our humanity is tied to the humanity of those past. It is a reckoning and recognition.

Nikole Hannah-Jones and the writers all invite the country to have a Sankofa moment.

My youngest daughter is preparing for her future as a Political Science major. She graduates in a few months. In addressing a school discussion during Black History Month, she reminded her teachers and administrators to not be embarrassed by being uncomfortable about what they don't know, about facing bias and prejudices and assumptions they may make about students of color in general and African American students, in particular. In her most informed and eloquent letter to them, she invited them to sit with their discomfort and grow from it and in so doing, they impart what education is meant to do. She said "Discomfort is Growth," - KYDRS

Discomfort invites possibilities and opportunities. What is it we don't know and want to know?

When I was a child in the 1970s, my father gave me a library card and encouraged me to discover the world. It was through that world that I read about white poor farmers who were migrating west in The Grapes of Wrath and the hopeful immigrants in A Tree Grows in Brooklyn and the young girl whose ethnicity and religious beliefs were under attack in Diary of Anne Frank. We learned about origins stories and the persistence in pursuit of freedom in The Autobiography of Miss Jane Pittman, Roots, and Incidents in the Life of a Slave Girl. He made us learn about the white hippy cult leader and what he did in California and about the religious abuse that resulted in hundreds of Black men, women, and children dying in an island jungle. What my father was teaching me, all before I reached high school, was to be empathetic and to understand history so we wouldn't be doomed to repeat it.

The 1619 Project and the children's book, Born on the Water, are necessary volumes to center the discussion of race, being, belonging, and ultimately, humanity in a country that claims to cherish life, liberty, and the pursuit of happiness for all men.

Nikole Hannah-Jones is active on Twitter in the daily assaults against this knowledge. She has been on book tours giving lectures and is teaching at Howard University.  In all of it and throughout the book, the invitation remains that knowledge is transformative.

The concluding thoughts of the book are that this is an ongoing narrative, that history is yet being formed and that there are some recent incidents that give enough concern and pause that if we don't get it right - now - future generations will pay the price for our complacency.

No, this is not an easy read, but neither is what happened through genocide, human and sexual trafficking, and economic exploitation that robbed generations of Americans of their potential. But if reading is the only discomfort one encounters, how privileged is that.

"Until Americans replace mythology with history, until Americans unveil and halt the progression of racism, an arc of the American universe will keep bending toward injustice." - Ibram X Kendi - editor of Four Hundred Souls