I, Tituba, Black Witch of Salem

It seems every time I read a book that sat with me for a long time, I have ponder the longer meaning of the work. 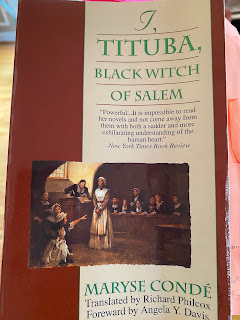 That is the case with Maryse Condé's book, I Tituba, Black Witch of Salem.

Historical fiction rarely is written from the point-of-view of Black women, especially those enslaved during the formation of this country. This book is situated in Massachusetts and Barbados during those frightening years of uncertainty in this vast dark country when Englishmen and their families invaded Turtle Island to find what was not theirs. By 1642, when this takes place, they were taking human beings to do what they refused to do.

If it wasn't such a fight about the truth of American history, this book would be perfect for high school English and History courses. It will not make it past some of those governors banning anything that makes white students (parents)feel bad, but it will give an eye-opening account of a deadly time.

The mix is religion, superstition, and ignorance.

The cast of characters were those religious zealots from England who landed in the colonies under the guise of persecution, oddly, that is what they did to others, especially in Salem.

Then there are the Goodwives who are essentially idle and prone to mass hysterics, much like the anti-vaxxers and mask protestors at school board meetings. They need a boogeyman and anyone who is different will do. They make the Housewives of (pick a major city) and any reality TV show appear tame. They even taught their daughters to flounce around in hysterics whenever Tituba entered the room.

Finally, there are the men, so many of the men who deign to be in charge of the world. There are the piteous self-righteous ones who won't even disrobe to be with their wives, parading around in the colonial world in all black like walking images of death. There are the enslaved ones who are figuring out how to gain back their dignity and freedom, and then there are the silenced indigenous ones whose land was stolen (sold, they say) for a trinket they can not use.

I tried to think of the men and how much of her life was because of her encounters with them. There was Congregational minister who was angry, frigid, and thought he deserved more than his wife and daughters, being cast out of Boston to a wretched and barren Salem, he thought much more of himself and in so doing, became an instrument in the wicked events that followed. I wondered, if she was as they claimed, wasn't Tituba a witch in Barbados or Boston before getting to Salem? I was angriest the most at him, a typical white man, mediocre at best, who would do anything for his quest for power.

Then there was the husband who sweet talked her away from what she owned to travel with him, warned as she was by the spirit mothers, this man was too weak willed to protect her. Or more than likely and to be witness for years to come, considered her even less than life worth loving, truly, and adoring, completely.  John Indian was the prototyptical bad boy, even more so than Christopher, the character in her return to Barbados who fancied himself somewhat of a polygamist succeeding in keeping her pregnant when John Indian did not. Or the final blow to her heart and perhaps to mine, the affections of a much younger man who wanted her for more than care of his wounds. For a brief moment, he loved her, the night before they were both arrested for planning an insurrection, betrayed by one who looked like them.

Maryse Condé's translated text, from the French, highlights several thoughts about Tituba. The decision to tell her story, to lift her up from more than a line in the colonial history, was not only historic, courageous, but ultimately, compassionate. Like the woman-at-the-well in the biblical narrative, Tituba deserved to have her live considered fully, for all the complexity of the times, and for what she had to endure.

I thought about the Psalter, of one in the first book, Psalm 7, that is attributed to David when he was running from his accusers. Tituba, in her afrospirituality, seems to have understood deeply the nuance of her prayers and that the safety of her life depended on her trust beyond herself. She survived the unthinkable and never-ending racism, sexism, and classism that is deep in the soil of this country.  She endured the ageism that crept up on her and the want of her life.

Ultimately, no one knows if Tituba actually returned to Barbados, as Conde concludes this tale and ultimately was killed by the same forces that missed doing that in Massachusetts.Or, as the notes suggest, that she went on to live an influential life, behind the scenes of this country, in the Bay Colony. Maybe she was one of the ancestors of that group of Black Americans who do not have ties to this nation west of the Mississippi, their people never knowing southern heat, but knowing the harm of northern lights. We will never know.

What we do know is there are hundred of other women, Black women, who endured this most inhumane treatment and never had their stories told beyond a line in a court document. The gift in this book is that Condé gave her such nuance, honored her humanity, and welcomed us into the consideration of what she left us.