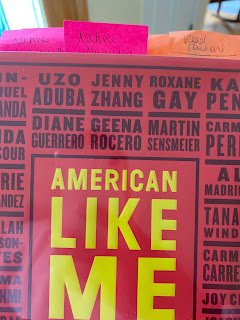 I was invited by the town library to take part in a community event celebrating fall and an opportunity to gather together. We live in Connecticut and in a town that is pretty much all vaccinated, so after putting off the festival last year, they renewed it for 2021.

One of the literary aspects of the gathering was to host a book discussion of the One Book/One Town choice, American Like Me, edited by America Ferrera.

Would this have been my choice? Probably not, but given that of the People of the Global Majority who live in this town about fifteen minutes from Yale, it made sense to pick this. Being still new to Connecticut, I'm intrigued by the many cultures that call this home.

So I dived into the reading with gusto, a pen, lots of coffee, and my post-it-notes.

The book is filled with first person accounts of an immigrant story from people who are "famous" in a variety of fields. They represent those who are between cultures either because they were born outside the United States of America and immigrated here or because their parents or grandparents were immigrants and hold onto the culture of their origin.

There is one Native Hawai'ian story, one Puerto Rican story (P.R. and Hawaii are both part of the United States so I was a bit perplexed that the editor chose these as additions). There is one Native American story, he is Lakota and Frank Waln's narrative is the one I chose to read. Conspiciously absent from her gathering of noted individuals were stories of African Americans or Black Americans. She completed excluded the story of those whose ancestry extends outside these shores, perhaps because not all can point to a map outside the American South or for those up here in the Atlantic states, whose ancestry has only been in Maine, New Hampshire, Vermont, Rhode Island, or Connecticut for centuries. Maybe she doesn't know any American born Black people?

Well, she included Issa Rae, she of Louisiana roots on her mom's side and Senegal on her dad's side. Maybe that counts?

Of the Africans in the book, she had Bambadjan Bamba, born in Cote d'Ivoire and grew up in the South Bronx, a Mecca for those of the Global Majority. He was a French speaking kid coming of age in the era of East Coast hip hop.

Roxanne Gay, born in the U.S. of Haitian parents. Her story is in here, so. maybe that counts? She is first generation. I know a lot of them now that I live in Connecticut, this part of the country is replete with West Indians.

Uzo Aduba, her parents Nigerian, Igbo, growing up with the proper English speaking cadence of upper class strivings of West African immigrants who modeled the British structure. Lots of the Global Majority in Massachusetts.

"I want all my friends to see us. I want them to know exactly who we are and where we're from. And I want us to stand proud in that." Uzoamaka Aduba

The vast majority of the book are Hispanic and/or Latina/o/x and Asian. Now, none of these identities - African, Asian, or Latine are monolithic, so America Ferrera did go a great job of gathering together immigrants representing South Asia, Latin America, Mexico, the Philippines, as well as Japan, China, and those who were mixed culture.  I just wish she had had as much forethought to consider African Americans. Perhaps that was a longing for me as I was reading this in a month celebrating Hispanic/Latina/o/e/x heritage without really acknowledging that Haitians are Latine, without connecting the border stories of the treatment of Haitians, and leaving out the Brazilians. It was a reminder in celebrating stories that we still have a way to go. Literature is one way to journey.

W.E.B. DuBois wrote of the "double consciousness" of Black people in America. That can be the feeling of those in this book, between cultures, as all are part of colonized people or marginalized people in a dominant society that centers Anglo Western thinking in everything. Some of the writers were striving to become acceptable and a part of that culture and others were striving to hold onto and celebrate their identities and success because of the sacrifices of their parents or grandparents in coming to what they thought was a land of hope and possibilities.

This work is not one we normally read or review. The Tayé Foster Bradshaw Bookshelf was born to highlight the voices and stories missed. We have been over a decade centering the writing and voices of Black women in our reading. Perhaps it is the womanist in me that wanted to hear what the sisters had to say. 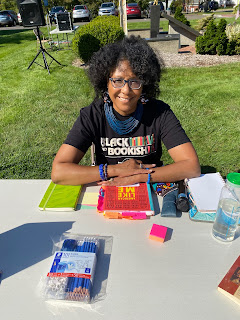 We began with only African American writers or those we assumed were so when we were growing up, like Paule Marshall, to discover later they had West Indian heritage. So we expanded and are delighted that so many of the women writers we encounter have a nuanced story of their being, yet all claim parts of the American promise in their narrative.

I am a writer. I have been since I was a child. I am not a novelist, however, and am grateful for those who share my ancestry - Dominican Republic, Haitian, New Orleans Creole, American South - Arkansas, Tennessee, and Kentucky - who shape my viewpoint. I believe that is part of the gift of this work by America Ferrera, to those who are first generation and to those who only know these shorts - there is a joy and wonder in discovery of the mosaic that makes up our communities. 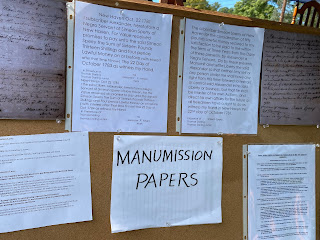 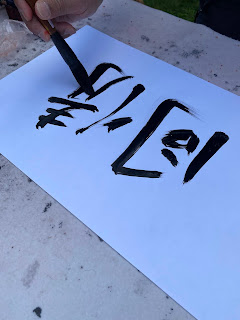 The mosaic and celebration is what the Woodbridge Like Me event was meant to convey during this past Saturday when we gathered on the town green, outside the Meeting House and near the Library Lawn. We met new people, delighted in stories, watched Indian and Chinese dancers, martial artist, calligraphy artists, musicians, and parents reading diversely. One of the hopes of the books is the hope I carry as we continue to navigate what it means to be American, the we can honor each other's stories and find resilience in those who continue to become who they are. There isn't one American story, there are multiple ones. I for one hope we hear them. 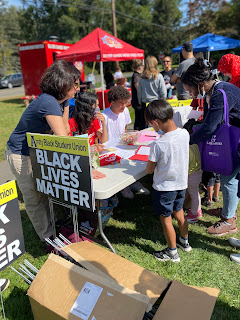 "I want all my friends to see us. I want them to know exactly who we are and where we're from. And I want us to stand proud in that." Uzoamaka Aduba

Tayé Foster Bradshaw is the writers pseudonym given to her by her late father and in honor of her matrilineal heritage of women teachers in discovery. She loves a good latte, is always readings and has reconnected with her spirit's love of water living along the Long Island Sound.