Merriam Webster defines it simply as "unhappy or annoyed." It's synonyms are aggrieved, discontent, displeased, dissatisfied.

I picked up this book 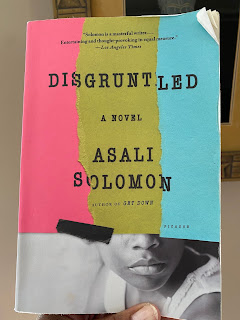 on an April trip to Philadelphia with my husband and daughter. We stayed at the Inn at Penn and did a bit of a walking tour of the University of Pennsylvania. The inn was next to the bookstore, so of course we wandered in.

This book by Asali Solomon, is set in Philly in the 80s, ripe for so many cultural remembrances for me as that was the mark of my teen years and entry into college. It was to be a different sort of coming-of-age journey with Kenya.

I was draw in to the image of Philadelphia, a far away town from my Missouri upbringing. It is a big bustling city with the mark of American history replete through it. The Lenape people, the original peoples before William Penn, a Quaker, arrived in 1662 to establish a place where freedom of religion was possible a respite from persecution in London. Philadelphia was also where  in 1684, when this country was not a country, that a ship named the Isabella arrived with about 150 captured souls. Descendants of those people remain there and in other parts of the Northeast that was not immune to the human trafficking of Black people. The setting of this book, approximately in 1985, the same year the Philadelphia Police Department bombed a residential home with six children, the MOVE bombing. This was long before Twitter or Facebook or Instagram Live could capture the assault, I was in college and only learned of it when it was reported in the Black press. This book sets a place in a part of history that not many know about, yet is not really a history book, per se, just invites those events in as backdrop and character.

West Philadelphia is a community where Black people were striving through the web of racism, economic exploitation, and housing discrimination. It is the home of then budding actress, Jada Pinkett, who appeared in the 1991-1993 seasons of A Different World, I was a young mother and professional by then, living in Chicago, and still not aware of the culture of Philadelphia. I didn't learn about "jawn" until recently, a local colloquialism with many meanings, much like St. Louis, "you straight?". This wonderful city is also home of another actor,  Will Smith, the fictional goofy character in   The Fresh Prince of Bel-Air that aired from 1990-1996.  He was from West Philly, an African American community choked off from economic and educational resources through that American tool of marginalization, yet a community full of culture, pride, and hope.

This is the setting of Kenya's journey with us. The narrator taking us through her life from eight-to-eighteen with glimpses in all these stages. We meet her striving parents, her father who wanted to create an African commune, the Seven Days, a MOVE-like organization that was trying to discover something, they were celebrating Kwanzaa before it was popular. Kenya's story took us from her all-Black school to her prestigious high school boarding experience at a white school. Being from Missouri, I'm not as familiar with boarding school culture, but living in Connecticut now, am intrigued by Black families that choose this route.

Kenya discovered more of herself and her questions in boarding school. She ultimately graduated high school and was awarded prestigious acceptance to several schools, choosing Wesleyan in Connecticut. These are the toplines of her story, filled with hope and possibility of someone who would have been around the age of my little sister.

The other side of the story in Disgruntled rests a bit in what is a part of humanity, striving to be whole, fulfilled, and live a life of purpose. It is a bit witty, at times comical, sometimes sad, still hopeful, and ultimately, wondering about life.

The last part of the book left me a bit bewildered, though, on the author's choice of a book-within-a-book and an ending that left me well, disgruntled. Beginning on page 245, we find a young adult Kenya reading a manuscript her father gave her, she didn't want to read it, it was perhaps a bit of his fanciful tale of what he imagined of the past or what he hoped for the future. That is not what left me frowning, it was the fate of Kenya that didn't seem to fit, or perhaps that thread was there after her circumstances changed and she found herself choosing an old friend and his roommate that altered her life story.

I do recommend the book, though, because it is a glimpse into what older GenX experienced in this time period in America, decidedly post-Civil Rights era, post Voting Rights, post Black Panther and right into the aftermath of the Reagan years and the dawning of the War on Drugs that would become a concerted war on Black People for the next thirty years. This book was a mirror turned back to reflect, ponder, and ask, as we are in another challenging time in our country and like Kenya, considering what the future will be when it is different than what was so carefully planned.