What Octavia Knew - Parable of the Sower

It has been sitting on my shelf for a while. I have several of her books. It was a matter of principal to me that they be a part of my collection, but hadn't read them yet.

My son was actually the one who prompted this. He is at home, like all of us, during Covid19. He asked me for something to read. Since he is also recovering, I thought about what I could send him that would pique his interest and not be too mushy.

I reached on my shelf for The Parable of the Sower and realized how much it is like now. It was written in 1993 and set in the future, still waiting to turn on my calendar to 2024, the year my oldest daughter is supposed to graduate from college.

Covid19 has unveiled a lot of things in this country that were already seeping beneath the surface. Water insecurity, food insecurity, class inequality, unemployment, overcrowding, walls for protection, guns, gender inequality, trafficking, educational inequality, and the never-ending racism that permeates the soil of this country.

It is part dystopian, part apocalyptic, and full genius.

Octavia Butler was truly the mother of Afrofuturism, feminist speculative fiction, Black science fiction and fantasy writing that has given us a genre to birth the imaginations of Tananarive Due, Tomi Adeyemi, Nnedi Okorafor, and N.K. Jemison, to name a few.  I would even add some of the works of The McKissacks to that list.

So what is it about The Parable of the Sower that makes it a must-read for 2020?

It is as truly possible now as it was truly warning then.


The Parable of the Sower 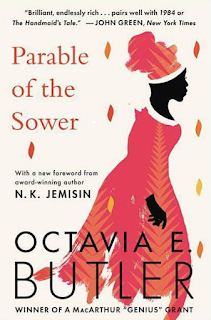 is written through the voice of a Black teen girl, coming of age in an America that is unrecognizable to any of us reading today, yet, it is very recognizable. Set in a future California that is dealing with the tragic effects of failed policies, corporate greed, and man's continued inhumanity to man, she is trying to make sense of it all in the only way she knows how - through her spiritual wonderings, observations, and writing.

I wasn't expecting the emotional roller coaster ride of this story and the journey it would take me on. Including themes of belonging, from her not feeling accepted by her Latina step-mother to first love (and teen sex), to survival skills passed on by her father. She took me through the power of education and I was shaking my head at how everything had a price, that her PhD holding step-mother brought school into her living room so that the children in their neighborhood would have a chance. Once Lauren left their neighborhood after those more desperate than they were set fire to their possibilities and decided that everyone should feel the ravaged pain of inequality, we learned that being able to read and write was a rare gift. It was what supported her younger brother Keith's ambition until that ambition got the best of him.

Octavia Butler issued a warning to us back in 1993, but I suspect we were not all ready to hear it. I know I was not reading science fiction and couldn't imagine that water would be commoditized (that was 1998 when I first saw bottled water sold en masse) and that entire communities would be years without clean water (Detroit). Octavia used the lens of the seer and the prophet to tell us what was coming and also to give us a warning about it. Written in the same time period as Margaret Atwood's, 1985 novel, The Handmaid's Tale, it was sounding an alarm and offering glimpses of hope that if we heed it, we can live past the horror. Corporate greed, sexism, rape, murder, colonialism, racism, patriarchy, all the dystopian themes of speculative fiction are replete in this novel.

There is also hope.

My younger daughter read the book when she was a freshman and deeply enjoyed it, except for the sex scenes. She resonated with the protagonist and her courage, hyper empathy, and foresight.

My older daughter identifies as an intersectional feminist. That completely shows up in Lauren. To me, she possesses what Alice Walker described as a womanist. I loved her character and her ability to handle her pain, see what was needed, and do what was necessary for the survival of others.

Read this book and the one after it, The Parable of the Talents. And determine to make a different future. 2024 is not that far away. We are already dealing with many of the things Octavia Butler wrote about as an impossibility that is reality. What will we do about it. That is the question that apocalyptic writing, dystopian writing challenges us to consider. What kind of future do we want? We are 12-18 months away before there is even remotely a vaccine for Covid19. After physical distancing since the second week of March ,a lot of people are anxious to return to "normal" life, but without the protections necessary to do so. Many are already furloughed from their jobs, children are completing their spring quarter in virtual school, food insecurity is rising, and toilet paper is becoming a highly traded commodity. What can we take away from her writing and warning to be sure that everyone has what they need, that greed does not have the final say, and that there will be a possibility for us all. 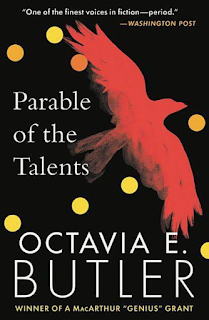