One of the things that most excited me about reading Laelia was that it was a modern story, with modern references and someone I could understand. Equally exciting is that the author is from a nearby suburb, splits her time between St. Louis and New York, and is a published poet. She seemed like someone I would run into at my local coffee shop.

Set in Peoria, Illinois, this story is as tender as the prized Orchids of the main protagonist, Rebecca, the quiet class of middle sister, Claudia, and the expectant muse of youngest sister, Gracelyn. 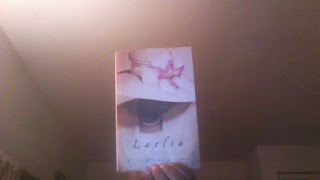 The keeper of the Cates Family heritage, history, and home, she helps us strategize and synthesize the elements of this tale that make us shake our head in total agreement.

Three sisters, esteemed in their own right, heir of a fortune meticulously amassed by their parents, delicately invite us into the intricacies of their lives as women and the decisions they make for their peace.

Rebecca is the eldest and most astute in how to manage the situation presented by three disappointing husbands.

Raised in the Baptist church tradition, a tradition that plays prominently in this lovely story, is not the most kind to women. This is especially true under the autocratic, misogynistic, paternalistic rule of the current pastor of their childhood church.

Never ones to cause controversy, they used their wealth, status, and dignity to their advantage. They were never in scandal, were not gossips, and did not often speak in church. Their support of church finances and the presence of the middle sister, Claudia, in her refined runway style, all helped to solidify the Cates brand as mature, independent women.

The author, a native of Webster Groves, takes her time in describing the mansion, the personalities of each sister, the backstory, and the condition of the husbands. It is not until one is half-way through the book that the intended end is developed. By then, I was completely enthralled by these women who decided that even in midlife, they still had life to pursue.

Gracelyn, the youngest and most delicate of the sisters, was the one that initially broke my heart with her unshakeable love and ultimate disappointment in her husband, Bernard. Jealously, even from a spouse who does not want to stand in the shadow of a rising talent, can snuff out the gleam in anyone’s eyes. Gracelyn, in a strong community of her sisters, was able to see the possibility of her talent and use it to further enhance the overall goal of the sisters.

The writer describes provincial Peoria, tenderly touches on the lives of wealthy blacks without being ostentatious. One can close their eyes and see the polished marble, the carefully chosen bone china, the shopping trips on Michigan Avenue, the stately woman behind the wheel of an equally stately Mercedes. Their wealth was not gaudily displayed and one could even argue is understated. It enabled Claudia, to use her style and grace to not only host a women’s luncheon, but to host former First Lady, Hillary Clinton, in her home. It was a brief nod of the budding voice of women who declared, “A man always holds some cards. It won’t hurt for you to be holding a few.” In the end, it was their status as women of independent means that enabled them to imagine a possibility not open to many women in midlife.

By the time we reach the end of the book, we are left feeling satisfied that our glimpse into these lives is nice, that the settle well, that things work out for them. We can imagine them now, twelve years after this story was published, having added to their life adventures and inviting us to do the same.

If there is anything I would change, it would be the writer’s tendency to reach far into the dictionary and thesaurus for descriptive words for everything from the sisters’ morning meal to the Orchids in the greenhouse or the clothes they pack for a trip. Less is more, perhaps that is the case with her GRE-like vocabulary. It is probably intentional, given the wealth, refinement, and grace of the African-American women who invite us into this part of their lives.

It was fitting for me to finish reading this book on my fifty-second birthday. The same time I am pondering the possibilities and enjoying the beauty of life in midseason.

Tayé Foster Bradshaw is a writer, mother, and woman in mid-life living in Kirkwood, a near neighbor of Webster Groves. While she does not know much about Peoria, she lived in Chicago and enjoys an afternoon on Michigan Avenue. She can be reached via twitter @lattegriot.