When All Us Is Tired: a thought about chop by treasure shields redmond

By Tayé Foster Bradshaw - April 09, 2016
The creative muse, the poet, artist, musician, writer, lyricist, sculptor, painter, the philosopher, even the preacher, all take the enormity of the world's events and tries to condense it so one is able to absorb it in a way that makes sense.

Poets, especially, capture emotions and interactions, trying to bring voice and feeling to those things that challenge our sense of being or push back against a recurring wrong.

Rarely do we use this space to review poetry, dedicated almost exclusively to the black diasporian female writer, we seek to highlight, elevate, and celebrate that which is often overlooked in the larger dialogue surrounding fiction in America.

Which brings us to the poet, the form, the book, and the subject.

In some ways she was, but every once-in-a-while, someone is sent, meant to be greater than their little form. Fannie Lou Hamer, just like a recent counter-part, Ida Goodwin Woolfolk, was a force to be recokned with. They each commanded their space, held space, and could care less if there was zero degree or an alphabet of degrees behind one's name. They each, in their own way, wanted to know what you were doing for the people. Neither one held public office, though the power of their voice counseled many and eventually influenced the broad space of citizenry.

A woman, especially a short-in-stature woman, can easily be overlooked in a male dominated space. That is, until she just gets tired.

Fannie and Ida both seemed to be that kind of woman, each about 5'4" tall, if that, and each one a little thick with the love, fortitude, and purpose that seemed too much for their compact stature. They did not let it stop them.

Each woman, in her generation, was born in a time of tumult and each one gained the power to speak up for herself and her people.

The recent passing of St. Louis' own, Ida Goodwin Woolfolk and the publication of chop:a collection of kwansabas for fannie lou hamer by treasure shields redmond, prompted me to encounter them through this unique poetic form.

I imagine that when Ms. Hamer and Ms. Ida sit together in glory, they each will relish their earned rest, and perhaps lament the state of the world they left behind, hoping and trusting that they have instilled enough in the rest of us to keep on fighting, walking, talking, and challenging.

Eugene Redmond, the Poet Laurete of East St Louis, is the creator of the kwansaba, an uniquely African-American poetic form that gives a cadence to the four hundred years of struggle for freedom, equality, and citizenry in a country built by hands like Ms. Hamer's ancestors. 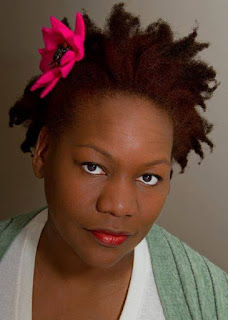 The kwansaba is a seven line poem, each line with seven words, each word less than seven letters unless it is a proper noun, like the Mississippi from which Ms. Hamer and the poet, Ms. Redmond, hail.

In this form, one can hear this woman's voice, this last of twenty children, as her middle-aged self comes in from the field to be one to register to vote, giving a bit of encouragement ot the SNCC volunteers who had toiled for over three years to get some traction among the black people of Mississippi. These people were tired, just tired and still wanted to fight for their freedom.

When you read this work, and if you listen to Ms. Redmond, you almost have to close your eyes and catapult yourself back to a dimly lit room in a black church, someone looking out because gathering together in black bodies was still dangerous. You can imagine her standing at the front of the pews, not in pulpit, women forbidden from that space, and encouraging the children to keep going, that their cause was just. She would have been one of the many unsung women who were the backbone of the Civil Rights Movement, just like they are the backbone of the Black Lives Matter Movement.

The title poem, "chop" forces one to see these aging bodies heave themselves from bed, in the "before morning even come" dark Mississippi mist. One can feel their hands stumble in the dark for the work clothes that were already read, tie that hair up so the coming sun wouldn't scortch it, and grab that lunch pail of food meant to fill one's belly quickly, stuff that is not on this vegetarian's plate today. They had to be in the fields before sun rose over horizon and picked that cotton that was still king in the south. This chopping and bending of backs, this never ending white fluff, the cheating that they knew would come at the end-of-the-season, and the wanting for more.

I read these kwansabas, first intrigued by the method, and then falling in low with how Ms. Redmond managed to condense her extensive research of Fannie Lou Hamer into a 34-page chapbook that makes me know this formidable woman beyond her being one line in a history book. I journey beyond her upright refusal to just accept a seat for herself at the Democratic National Convention but demand space for everyone because "all us is tired" until everyone is able to exercise their rights.

One of the young people at a recent workshop conduted by Ms. Redmond, commented that they weren't sure they liked poetry. When asked why, the young woman replied that it was "too hard" because it "made you think a lot about what was going on." 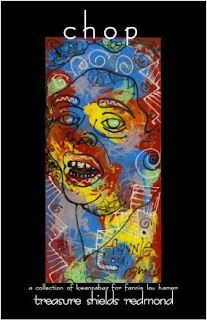 Poetry, art, music, and other artistic expressions are meant to take those unexplainable things, like the murder of a young man on his front steps, in front of his wife and children, and help make sense of the feelings that accompany it.  chop is just such a book, densely packed, biographical in some ways, exploratory in others, it invites the reader to examine assumptions about the form, the topic, and history itself.

This is a must-read volume and was a fitting choice for National Poetry Month.

I invite you to encounter anew this unsung hero, this woman yet to be celebrated, this force, much whose absence has left a void, much like the recent loss of Ida Goodwin Woolfolk. I imagine a kwansaba will be written for her one day because when all us is tired, we press on until rest comes.