Have you ever wondered about the backstory of some of the most familiar fairy tales? 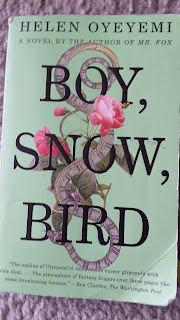 Hardly an American girl has grown up without musing about Prince Charming or thinking their mother is the wicked stepmother for making her clean her room before a school dance. Cinderella stories, Little Red Riding Hood, The Wizard of Oz/The Wiz, even Snow White and the Seven Dwarfs, all present some element of wonder, hopefulness, and rescue. Someone rescues the damsel in distress and it is not often a woman.

Then, have you ever wondered if that story were turned upside down with an entirely different story line and contemporary topics to make you ponder if you ever knew the story in the first place?

Such is how I felt when I was reading Boy, Snow, Bird by Helen Oyeyemi

This Nigerian-heritage, London-raised writer challenged me and intrigued me with her story replete with themes that resonate in 2016.

When I first started reading the book, I couldn't decide if I would be annoyed or not. I even wrote myself a note that "she is not Maya Angelou or Toni Morrison." Oyeyemi's initial use of fantasy or fable to tell a nuianced story that stretches beyond imagination into reality. Once I  moved past my initial resistance to the story, I poured myself into the story. Then, as I delved into the story more and discussed the themes throughout the woven histories, I decided that she brings a fresh perspective to issues that are not unique to just American blacks.

The mother-daughter relationship is explored in the nuances of accepting one who may look, act, and feel differently than you, to be the mother of one who is pushing back against convention or expectation. The issue is also explored in the life-long  yearning for a mother, to be unconditionally loved and accepted by one who is supposed to love you through anything. Finally, the topic is explored through the ways one becomes mother, whether yearned for or forced into, and  how that change in dreams, expectations, and status can render itself in the female familiar relationships. This theme extends itself to sisters, aunts, cousins, grandmothers, essentially a very female representation in all the ways that can present itself.

Another theme throughout the book is the examination of stereotypes.

The book takes us through a journey in American history, subtly touching upon historic events from immigrants in New York in the late 19th and early 20th century to the Civil Rights Movement in the 60s. There are also traces of The Women's Movement, perhaps that 1960s-1970s period has its origins in the 1020s and 1930s, scant years after the Suffrage Movement.

Illusions are another theme throughout the book.

The concept of mirrors, seeing, reflecting, and discovering are told through the stories of the three named characters - Boy, Snow, Bird. It faintly touches on that theme with Boy's "father" Frank Novak. The reader will question and wonder if what we see when we look into the "mirror, mirror on the wall" is really what is reflected back or if that reflection is a myriad of expectations placed upon the viewer by the larger . We also wonder if that view changes as circumstances, locations, or class changes.

Scattered in the story and more completely at the final reading is the theme of sex, sexuality, and identity.

The thought of a woman being a man or a woman not wanting to take on the womanly expectations of her time are devoted in this story. When I initially read about the bookstore owner, for instance, I felt a sense of connectedness as a womanist. I loved the independent nature and the quest for learning to maintain one's self beyond convention of marriage and children. When reading even the named character, Boy, and pondering what protection that unusual name was intended to render. Either it was the naming of a girl as opposite her identity or in challenging identity itself.
The unexpected part came at the end telling of the story of Frank/Frances and how taking on a costumed identity is a method of survival in a world that in unaccepting of one's authentic self.

Another theme that is somewhat painful was the theme of colorism.

Snow, as in Snow White, is celebrated for her delicateness, the sheer whiteness of her skin. In this story, the issues of "passing" are touched on in the family that Boy marries into. The sudden discovery of who one thought they were being challenged upon the birth of a child. The story felt so painful as many African Americans during the years following the Civil War and even into the early 19th century chose to use their one-drop to their advantage and pass into the ethnic enclaves of parts of the east coast. The false identity and the sheer effort to maintain one's perception of being an other weighgs on the delicate balance of family place, pride, and purpose. Oyeyemi delictely covers the topic without outright accusations of being a race traitor or sellout.

In the end, the book is well written and touches on themes that can be the subject matter of many a high school or college literary paper.


Tayé Foster Bradshaw reads, writes, and drinks lattes in her near West suburban townhouse in the middle of the woods down the street from a flooding river.