Showing posts from November, 2015
Show all

For The Love of the Book

By Tayé Foster Bradshaw - November 19, 2015
The National Book Awards are a yearly bibliophile's Oscar's, Emmy's, Tony's, all rolled into one.  It gives recognition and validation to those writers, authors, poets, essayists, dreamers who do the lonely job of sitting down before a blank screen, blank page, or blank notebook to extrapolitate some thought, some feeling, some moment and bring it to live on the page. The awards include fiction, non-fiction, and poetry. It was a delight to know that political commentator and blogger, Ta-Nehisi Coates's book w,as one of those awarded. He wrote a concise emotive about the 2000 murder of his Howard University classmate. He was in a black father's body writing to his black son. His touching, sometimes painful, very revealing memory was a bit of a pinch in that there is nothing new under the sun, black male bodies have been suspect, even clean cut, nerdy college students going home. In a time before social media, smart phones, cameras to record the events and a h
Post a Comment
Read more

The Power and Place of Literature in Shaping Perceptions 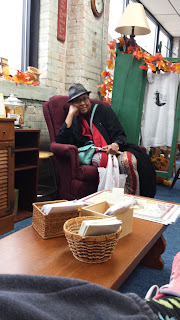 I'm writing this sitting in my local county library.  It is a magical place with chairs for working, wifi for surfing, newspapers for reading, magazines for thumbing, and of course, lots of books for reading. This free open and accessible place is a mecca of all humanity. There are college students, retired, tutors waiting for the descending of the high school students that will fill the main area in an hour. There are writers and consutants, and yes, the homeless, all in community in this one place. When I stopped in today, respite from the contractors doing work in my townhouse, I made my usual look through the fiction section to see what was new or what I have missed.  I remain a literary critic, primarily in the African and African American fiction genres. I also remain critical of the lack of quality offerings from mainstream sources. One of the things I always note are the tags that indicate it is an "African American Fiction Selection." It is helpful in
2 comments
Read more
More posts