A Matter of Souls by Denise Lewis Patrick 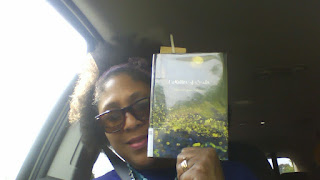 This collection of little vignettes was a delight to read.  I found this little treasure in the local library while perusing titles in the Teen Section in preparation for The Hurston & Hughes Literary Circle 2.0 that I lead every summer.

The stories span the space of American black history that did not feel like I was reading a recitation of facts of the horrors of being sun kissed in the deep south. Ms. Patrick deftly presented the topics and left it up to us to uncover the deeper meaning in her conservation of words.

When the matter of human history is examined in the fullness, one of the things we share in common is the soul, the space of wonder, of will, of emotion, of feelings, that is supposed to set us apart from other breathing creatures. Sun kissed or moon white, humanity in the depths of being, longs for acceptance, love, and connection. That was present in these little moments with a son finding his way, a daugther wondering about life, and a father taking a chance. Introduced to the characters in mid-happening, life a snapshot, we are able to pause and wonder about the nuns who taught black kids but didn't like them, the many who did not migrate and were left behind in a place stubbornly clingling to a false notion of superiority, the kindness of one behind a lens, gently reminders that humanity is the most precious thing.

This gentle little book is accessible in language and relevant still, as a matter of souls is the matter of history.
Posted by Tayé Foster Bradshaw at June 07, 2015 No comments:

Toni Morrison is one of the most studied authors of our time. This octogenarian has released her latest book. Race, gender, equality, equity, and family continue to be familiar themes in her writings. That remains true in this, her eleventh book.

God Help the Child is one of her only books set in contemporary times.  Morrison lets the reader know, in tightly rendered 178 pages, that her age has not removed her from a keen observation of the nuances of modern life.

As a writer, her gift of compelling storytelling rings true in each page-turning-chapter. The characters each speak in their own voice, all of them female, different ages, different races, different colors, and connect on the ultimate theme of the book - the universality of childhood trauma shaping the adult lives across gender, race, class, ethnicity, and religion.

The short work is absent some of the total mysticism that is repleate in her previous works like Beloved. In this work, the language is accessible and beyond a short scene when Bride, the central character, has an unexplained body change, the rest of the story is believable.

The news of the Duggar family imploding over the sexual assault of their daugthers by the hands of their oldest son continues to capture headlines just I was reaching the close of this story. Separated by time, imagination, distance, and religion, the sameness of shame, question, decisions, and blame ring true. The story, one fiction, the other real, became a painful one to me, a survivor of childhood sexual trauma.

One of the things that I believe Toni Morrison is giving people like me and even the Duggar sisters, is the gift of validation. That what we witnessed, like Bride and her late night encounter of the landlord raping a young neighbor outside her apartment window, or the Duggar sisters finding out that fondling of their brother was wrong, she gives us a bit of restoration.

The novel ends tightly and with a feeling of wanting more. I wanted to know what happened to Bride and the people we encounter. I wanted to explore more the issues of colorism raised by the mother's rejection of her blue black daughter. The former corporate me wanted to flush out the story of the manipulative fakeness of the white female friend, the jealousy of the black female executive.  I closed the book with more questions than answers, appreciative of Toni Morrison's gift and her long-time work with her publisher, Alfred A. Knoph, celebrating one hundred years in publishing, hungry for closure.

Perhaps the sparseness of some of the themes and the intend of the resulting dialogue is why she wrote this in a modern voice, accessible in understanding, and relevant in setting. This like many other Morrison works will have a permanent place on my shelf. Like other works, it may be one that I will have to revisit with a second eye.
Posted by Tayé Foster Bradshaw at June 05, 2015 No comments:

Literary criticisms of works by, for, or about women of color.

Copyright - 2007-2015 by Antona Brent Smith/Tayé Foster Bradshaw Group
All Rights Reserved. No parts of this work may be used, reprinted in electronic or print form without consent of the writer. All content is the original and creative work of Tayé Foster Bradshaw
Contact - readwritethinkconnect@gmail.com
tayefosterbradshaw@outlook.com

Books and Authors That Stay With Me