The Gathering of Waters

I've always heard the phrase, "if these walls could talk" anything we were someplace something significant happened or in the place of history. 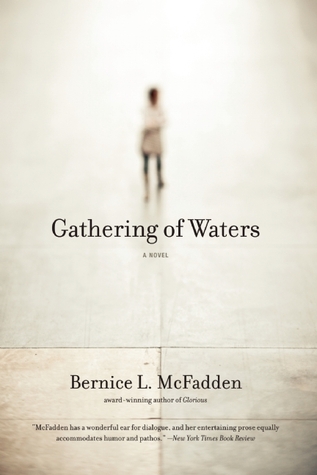 The new book by Bernice McFadden took that one step further and let the town, Money, Mississippi take on her own persona and tell a story that stretched through generations and wound through historical events, much like that mighty river pulsated and pushed through several states and spilled out her waters at times unexpected.

She, while her "gender" is not identified, to me, she could be nothing else that a very observant female who absorbed the nuances of stories and events, tied it all together, and understood the lines of life that connected it all.

Money, Mississippi, most of us only know of that place because of the 1955 brutal murder of young teen, Emmitt Till, visiting his southern relatives, a "sophisticated" boy from Chicago.  The historical context of 1955 and the stirrings that had started almost 40 years prior with the trickle then the flood of migrants up north, the growing unsettling of things happening up south in Montgomery, Birmingham, and Atlanta, were all sitting around like still birds in the trees, watching the events take place.

Money took us back to the beginning for you have to understand the origins of a thing, in this case a spirit, to understand the resulting middle and ending.  She told us the who and why of events that before were only lines in the history book, except to those who lived through them, like the 1927 Mississippi River flood or the 1929 Stock Market Crash.

McFadden is both lyrical and poetic in her prose, her keen understanding of each story.  She was able to give voice to the racist murders of a teenage boy and made us feel the evil that drove the murderous rage that was insatiable.  She was able to reach into the tender teenage heart broken by tragedy and numbly walking into a new life. McFadden helped us weave together the lines and verses of what seems like inconsequential events.

This was a work of literary fiction that absorbed the feelings of events and gave them the story that only the grave, the spirits, the winds, and the waters could tell, she gave them life and helped the reader walk away with an understanding that can only come by going back to reach to now.

I would be remiss if I did not lay caution to some of the colorful language used when describing the antics of the spirit that jumped from unsuspecting baby to dead boy brought to life, if you are a little squeamish with the occasional description of the coupling act or "f" word, skip this book, however, if you can appreciate her literary telling of life that pulsated along the pace of the mighty river and the backdrop of events that changed a childhood or two, check out this book.  I picked it up from my county library for something to read on my recent roadtrip, I wasn't disappointed.

Like the gathering of waters, The Gathering of Waters flows, ebbs, pulsates, breathes, and reminds us that what is, once was, and what is going to be, may have already happened.
1927 Mississippi River Flood 1929 Crash 1955 Bernice L. McFadden black female literature Emmitt Till Hurricane Katrina lynching Mississippi Money race relations