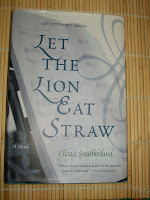 She rests with me, at times she is me. I am speaking of Abebe in the classic book, Let The Lion Eat Straw.

This wonderful treasure, celebrating its 30th anniversary, is by Professor Ebele Oseye. I think she came to my life at just the right time, to let me know, that tomorrow is still full of time.

She was blissfully happy in sandy,North Carolina eating boiled peanuts catching the old soul of her grandmother, not her grandmother. Her mother, up in the cold and rat infested north was hunting down a different life. Five years go by before the mother, Angela comes to get the little girl and her life with the midwife. She whisks her away to trains and dark streets, noise and indoor toilets, and her New York Daddy.

Arthur Lavoisier turned out to be the sunshine to radiate hope and promise and life to this girl. Her mother, Angela, was noticeably distant and emotionally cruel to her, despite her deep love. Perhaps her mother resented her daughter, or as often happens, the circumstances surrounding the conception of the daughter. Yet, it was not the daughter's cause.

The father showered her and protected her so his death upset her soul in ways that only came out when she named one of her future sons for this man, her father, yet, not her father. The soul love of the father protected her in her teenage years from what would be her mother's wrath. The piano followed her throughout her life, the reminder of that deep conviction and acceptance a father gives a daughter.

Angela wanted a very different life from the Brooklyn surrounding her daughter. She didn't allow her to date, kept her looking like a little girl, even in high school, and insisted that she attend the music conservatory. It was never to happen because "that country boy" took over Abebe's life with the deep and Paul Robeson-essence-of-his-voice. Their measurements found in the black and white keys, ended up entwining them for life.

He married her and immediately she became pregnant. True to the soothsayer's message that her mother sought right after Daniel sang, Abebe did go down a very different path.

In the end, after journeying through her asthma attacks and her life as wife and mother, all along I kept hoping she would find that trace of her dream. She wrote a play that was performed, yet, circumstances never allowed her to write another one.

I could feel the longing of her heart along with the quiet acceptance of everything life brought her way. Her weariness settled on me like a blanket on this cold October day. She made me long to have the dreams that filled my young girl heart and to hear my father's strong voice again.

This book is set in a time when most black women did not have the choice of a college education. Brooklyn was still packed with blacks from the south seeking better opportunities, trying to shed any traces of their "country" roots. Wanting to don an attire replete with sophistication, absent the stifling poverty, backbreaking menial work, and crushing racism that was thick like the smoke.

Written in poetic lyrics reminiscent of Toni Morrison's later work, A Mercy, this book is a must read. I finished it in a couple days and still relish the sweet muse. This was one cherished gift from a friend.
Amistad black woman protagonist Brooklyn classic black female literature Let The Lion Eat Straw Northern Migration pregnancy